Kata have been used by karate masters over the years for many reasons, e.g. to aggregate and help with the transfer of knowledge to their students, to help with training, conditioning, etc. But it is thought that when karate made it into the Okinawan schooling system thanks to Anko Itosu (and later onto the Japanese shores through Funakoshi), katas were systematically sanitised, with “dangerous” techniques hidden or removed altogether. 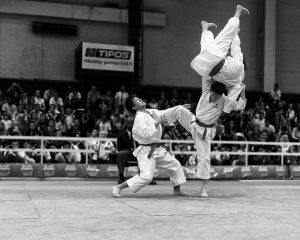 Bunkai (分解) aims at deciphering the kata to identify these “hidden” techniques (chokes, arm locks, throws, etc.) or in other words, it is the process by which a kata is analysed and decomposed to extract useful fighting techniques (oyo, 応用). It is usually performed by a student who will use the selected kata (or katas) to respond to predefined attacks from other students.

As techniques in a given kata may be used in different situations, there might many ways to interpret a given sequence. In fact the bunkai may be obvious depending on the technique (or techniques) being analysed, the moves preceding and following it, and the level of maturity of the student, the sensei’s willingness to share his knowledge, etc.

Therefore there are usually several stages a student, under the guidance of his sensei, will follow depending on his level of experience, the sensei, the kata, etc.:

Omote (表): In Japanese, omote means “surface”. Therefore omote bunkai are simple and direct. “What you see is what you get”, i.e. if a technique looks like a block, then it must be a block (not a joint lock, throw, strike or wrist release). In other words, every technique is taken at face value. This is a simplest way to interpret kata but the downside (that becomes apparent pretty quickly) is that it often relies on unrealistic scenarios.

Ura (裏): The second way of interpreting kata is known as ura bunkai. In Japanese, ura literally means “behind”. Hence, the concept of ura bunkai implies to hidden or advanced techniques. In other words, things might not be not as they immediately look like: if it looks like a block, it could be something entirely different! To an extent, this interpretation is consistent with the fact that many old and dangerous techniques were removed or hidden within the kata. Therefore, although a kata might look very simplistic in its nature, it could actually have some very advanced application(s) hidden inside it.

Honto (本当): In Japanese, honto literally means “real” or “true”. This refers the original and true meaning of the technique…

Over the years, Bunkai practitioners have defined rules to aid with the analysis of kata. Such a set used by Gōjū-ryū masters was known as the Kaisai no genri:

– Don’t be deceived by the shape (embusen) of the kata.

– There is only one opponent and he is in front of you.

– Every movement in kata is significant and is to be used in application.

– A closed pulling hand returning to chamber usually has some part of the opponent in it.

– Utilize the shortest distance to your opponent.

– There are no blocks.

– Angles in kata are very important.

– Touching your own body in kata indicates that you are touching part of your opponent.

– There are no pauses in the application.

– This is one set of rules but many more exist!