On Sunday 17th of March, we had the pleasure of welcoming Matt Price Sensei in our Holmer Green Dojo, for 3 hours of training focused on Kata (型) execution and competition Kumite (組手). What a great opportunity to get an insight into the mindset of a competition karateka, kumite (combat) tactics, training strategies – all of this complemented by many anectodes from his travels to Japan and his life as a competitor. A great day !

The first session focused on kata (Heian Yondan, Tekki Shodan, Jitte) and – some of – the details to watch out for when executing : awareness (mushin); continued alertness (zanchin); correct execution of techniques; use of body core with practical examples (Tekki Shodan); power generation & hip rotation.

“Training in kata is spiritual as well as physical. In his performance of kata, the karateka should exhibit boldness and confidence and at the same time humility, gentleness and a sense of decorum, thus integrating mind and body in a singular discipline.” M. Nakayama

The second session focused om competition kumite, with an introduction to feet movement and distance management, diversion, useful examples of defensive techniques such as protecting against kizami tsuki… and much more… A great introduction for those of us who were not familiar with this aspect of karate !

“The purpose of striking and kicking in practice becomes not an attempt to destroy an enemy but a means of discovering your own and your partner’s strength, balance, intuition, and mental stability. Instead of facing each other with distrust, fear and competitiveness, you must meet your practice partners with concentration, sincerity and a sense of enjoyment.” Saotome Mitsugi

Thank you to Matt Price Sensei for his time and Dave Davenport Sensei for organising.

To complete this post, please see below the reproduction of an article published in Shotokan Magazine :

“As a karate-ka failure must always be seen as a part of the journey. It is something you will meet on your chosen path. You will learn from your failure and move ever closer to your goal. To continue to grow as a person and a karate-ka you must accept failure as part of the growing process.

As instructors and coaches it is important that we understand what can lead to this closed mindset, where failure must be avoided at all cost. We must understand the process that can help lead our students and ourselves to have growth mindsets where failure is just another stop on the road in the journey. As soon as failure is no longer seen as a humiliation to be avoided at all costs, you can take part and enjoy activities that will see you take great leaps forward in both your technique and understanding of karate. 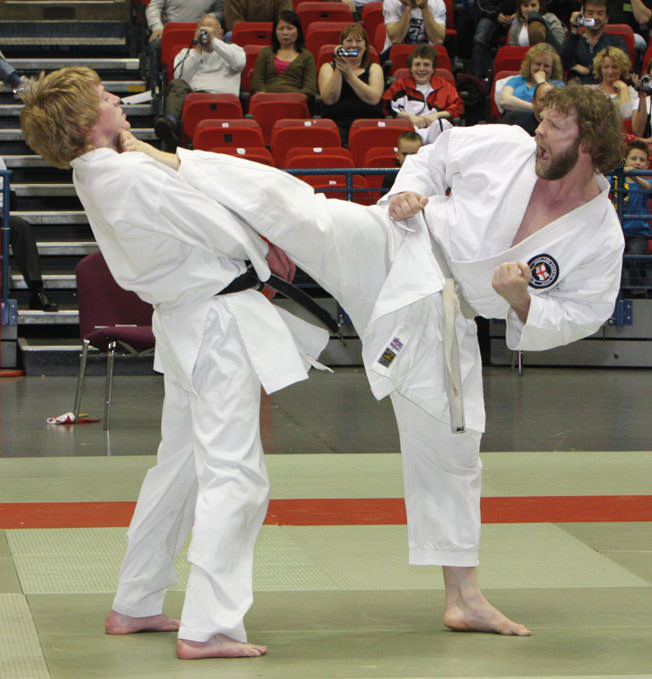 Author, Matt Price 5th Dan during a demonstration at the KUGB Nationals 2010.

A growth mindset karate-ka is one willing to take risks and except challenges. A closed mindset karate-ka is one who doesn’t want to do anything that could result in failure. Sometimes the smallest and most insignificant comment to a student can result in a closed mindset. The most common error whilst instructing is praising preserved talent. This error could be something as simple as telling a student who is performing well that their karate, kata or kumite is good. The instructor will obviously be praising the preserved talent as encouragement for the student. With the thinking that if the student knows that you appreciate what you are seeing that this will motivate the student more. Unfortunately this is not what will happen, the praising of talent will cause the student to fear taking risks that could put them in a bad light. The student will come to believe that some natural talent that they possess has taken them so far but to risk losing face is too much to bear. I am sure that we have all had a student come into the dojo that seemed to take to karate very easily; they show natural timing and almost immediate good posture. They pick the kata up straight away and look the part during kumite. They start shooting though the grades with ease and as soon as they enter competitions they are relatively successful almost immediately. Everybody including the instructors tells them how great their karate is, you think ‘wow I have a star for the future’ and then they disappear. Further following up on the lost student will often reveal that they had shown great progress and promise like this in previous activities. These students have been given a closed mindset.

So what do you say to encourage your student? Well instead of praising preserved talent, praise effort. Show your students that you value working hard and trying your best as the most important thing they can do (which it is!). A ground-breaking study by Carol Dweck, a professor at Stanford University and one of the most influential psychologists of modern times shows the incredible affect even the most innocuous comment can have on our mindset. Dweck and a fellow researcher took 400 students between the ages of eleven and twelve. The students were given a test that consisted of fairly easy puzzles. Following the test the students were given the results plus a single six-word sentence of praise. Half the group were praised for their intelligence, “You must be smart at this”, and half praised for their effort, “You must have worked really hard”.

The next stage of the study saw the group all given a much harder test. None of the students did well, but the two groups responded very differently to the situation. The ‘praised for intelligence’ group spent very little time trying to solve the problems and gave up easily. When asked how they found it most said that they had not enjoyed it it. The ‘praised for effort’ group responded by getting stuck into the puzzles and trying different strategies and spending time trying to come up with the answers. When asked how they had found it, most said that they had enjoyed the challenge.

In the final stage of the study the students were given a test at around the same level as the initial test. The ‘praised for effort’ group increased their scores by an average of 30 percent, whilst the ‘praised for ability’ group scores dropped by an average of 20 percent. All this because of six words! Dweck was so surprised by the results that the test was repeated a further five times in different schools all with the same results. As part of Dweck’s conclusion she wrote, “We are exquisitely attuned to messages telling us what is valued. I think we go around all the time looking, trying to understand, ‘who am I in this setting? Who am I in this framework?’ So that when a clear message comes, it can send a spark.”

Whilst competing I have felt the pressure brought on by the wrong thing being said to me. I can clearly remember warming up at a National Championship and a coach of mine coming over to me and saying, “I don’t know why everybody else has bothered turning up today you’re going to win this easily.” Now my coach obviously told me this as encouragement and motivation but all I felt was a whole heap of pressure landing on my shoulders. I remember thinking, “Can I live up to this?” I felt in a no win situation. If I did win, so what? That’s what I should be doing anyway. If I lost I was letting my coach, my supporters and myself down. If this comment had come from a general friend or just somebody at the event the impact would not have been so great, but as it came from a coach I respected the pressure seemed overwhelming. To combat this I had to reset my whole thinking on the day and convince myself that the event wasn’t important (even though it was!) and I was free to enjoy my day with no pressure. This change of attitude worked and I did manage to win the event, but then perhaps the coach went away believing his comments had inspired me rather then potentially stifling me.

A very good friend of mine has recently taken over a role as a national karate coach. This talent rich team had been performing poorly but almost immediately there was a massive improvement in their results. When I asked my friend what he was doing differently to cause such a fast change in their results, he told me the only thing he had done differently so far was to tell his fighters to feel free when competing, to enjoy themselves and to have no fear of failure. The difference this change in attitude made was staggering. The fighter’s mindset had been changed and they no longer lived in fear of throwing the wrong techniques and losing the bout. They fought with confidence, not dread of doing the wrong thing.

Dweck’s study shows how easy it is to create a closed mindset. Her work, along with others in this field like it, have helped the world’s top coaches in many different disciplines develop athletes and competitors whose minds are open to learning and free from the restraints of fearing failure.”