In our series of articles written in view of the current crisis and to complement your physical training, please find a short piece looking at the development of sport karate in the 20th century, its relation to Budō, its influence on Kumite, Kata and Kihon, as well its impact on the evolution of karate as a whole…

“Karate is Budo and if Budo is removed from Karate it is nothing more than sport karate, show karate, or even fashion karate – the idea of training merely to be fashionable.” Mas Oyama

“Why do its historians balance karate simultaneously on the descending slope of tradition and the up-escalator of modern sport?” Craig Colbeck, Karate & Modernity

“Karate, like anything else, must be constantly on the move.” Scott Langley

Karate is a martial art that places strong emphasis on self-development (Budō, 武道), beyond the learning of techniques and physical aptitudes. Indeed, one of Gichin Funakoshi’s 20 fundamental precepts reads as follows: “Spirit before technique”.

Also quoted on the JKA website: “Karate is not a game of points […] or showy demonstrations. It is a martial art and way of life that trains a practitioner to be peaceful; but if conflict is unavoidable, true karate dictates taking down an opponent with a single blow.”

In other words, at the heart of Karate philosophy and practise, the avoidance of dangerous situations and restraint is the primary form of defence. Sport karate might therefore appear in contradiction with this fundamental precept as on the Tatami, the aim of each participant is to overcome the opponent: striking first and fast is primordial.

This dichotomy is also described from an instructor’s perspective by Kanazawa Sensei : “The greatest problem to overcome is to select the point of view from which to approach and explain the training system; Kumite as a competitive sport, or as a martial art (Budō). [I] chose the latter because, not only does this allow everyone; men, women, and children, young and old to progress within their capacities, but it also includes training in basics and the application of the fundamental techniques, mandatory in the development of a good competitor. To illustrate the difference between these two viewpoints, we will use, as an example, a class of fifty students. From the viewpoint of karate as a competitive sport, the teaching method reaches its goal when five students among the fifty become good competitors. This number succeeding in individual or team competition is sufficient to establish the reputation of their Dojo. However, from the point of view that karate is a martial art, the method of teaching does not reach its goal unless it achieves the physical and mental development of the entire class”.

Objectives of the martial artist and the competitor are very different. Reaching these objectives requires different methods for the teacher and focus points for the student. Training with the sole aim of achieving competitive results might dramatically restrict the benefits and ultimately the philosophy underpinning the art, which is not desired. Gruss Sensei commented this in the following terms: “The introduction of Karate competition was the first step towards its “de-martialisation”. The original intention was rather good: to propose to its practitioners a test that would allow them to assess their ability to react in an unpredictable situation… But through its dissemination throughout the world, it became a political and financial issue, and the martial art lost its former nobility… The teaching of sport karate was designed based on other similar rule-based sports: winning mentality was privileged over individual development…“

But beyond the ultimate objective sought by the practitioner in terms of personal development, sport karate also had a significant on the development of practices and techniques…

Sport Karate has had a significant impact on the practice of Jyu Kumite too.

Back in the 70s and 80s, the rules emphasised upon the need to defeat one’s opponent with a single strike (Shobu Ippon Kumite, where an Ippon is awarded for a technique which is judged decisive with little opportunity for the opponent to defend against). At the time, prominent figures included Yahara and Kagawa Sensei. Their objective was to achieve Sen No Sen (or better, Sen Sen No Sen), waiting for the decisive moment to strike through anticipation (where possible, pre-emptively). Beyond technical ability, these advanced fighting strategies required some level of mind readiness best described by the following :

– Zanshin (残心), a state of continued and heightened (relaxed) alertness;
– Mushin (無心), or “no mind”; a state of awareness characterized by the absence of disruptive thoughts, in which one is able to react without the need to analyse how to respond (also referred to as the “zone” by sport scientists);
– Fudo-shin (不動心), “immovable mind”; courage displayed both mentally and physically, not easily disturbed by internal thoughts or external forces;
– Senshin (先心), meaning “purified spirit” or “enlightened attitude”, which may come after a lifetime of practice in controlling thoughts and purifying one’s spirit… 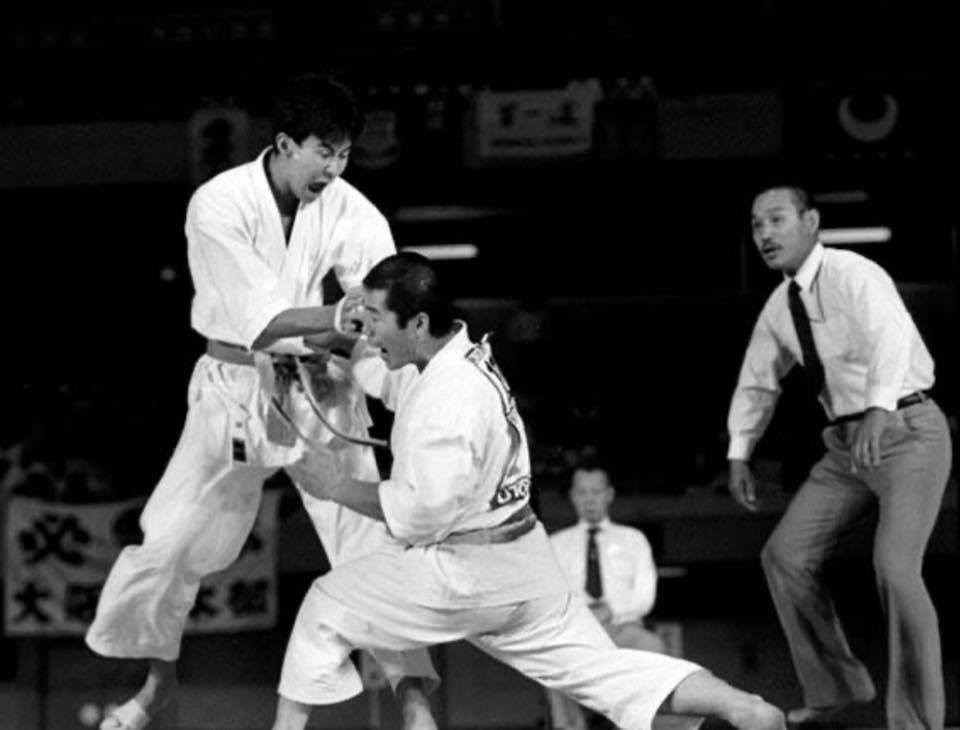 Nowadays, WKF rules, the use of protective gear (gloves) and the point-based system have somewhat diluted the spirit, by granting practitioners the opportunity to strike multiple times, thereby increasing the importance of physical training to achieve resilience, agility and speed of delivery. Physical development has become the priority, and the harmonious unity of mind and body has become secondary.

Kata, as a training tool offers many goals and benefits that may be tailored according to physical condition, energy levels, age, motivation, training objectives etc. As a practitioner, we may choose to focus on specific aspects, such as techniques, stances, transitions, breathing, power generation, artistic rendering, etc. Broadly speaking, kata training can be decomposed in the following:

– Techniques and body conditioning: kata provide a variety of techniques and positions that support body development, e.g. one-legged stances and pivots to develop balance, deep stances to increase body strength and jumps to augment explosive power ;
– Body mechanics: kata offers the opportunity to understand how to best use one’s body, training to minimise injury, maximise power generation and move as efficiently as possible ;
– Application: kata embeds many (undocumented) applications that nowadays, many practitioners are striving to decipher. Indeed, from a fighting perspective, whilst most techniques have an obvious and immediate meaning, they may not make any sense in a real-world combat situation. Kata should be investigated with principles in mind. Once these principles are understood (creating openings, moving aside to gain advantage, using one’s opponent’s balance, etc.), techniques become interchangeable and kata blend into a comprehensive unique fighting system ;
– Artistic execution: each kata in the syllabus bear a symbolic meaning and through the advancement of modern competition, performance has become a critical aspect of kata execution, with high jumps, elongated Kiai, pauses, etc. with a view to impress judges and audiences.

Whilst the above aspects are complementary, there is a possible contradiction between the need for an effective application and the artistic facet of execution: indeed, a low-level kick (effective from a self-defence perspective) becomes far more impressive if executed head height. 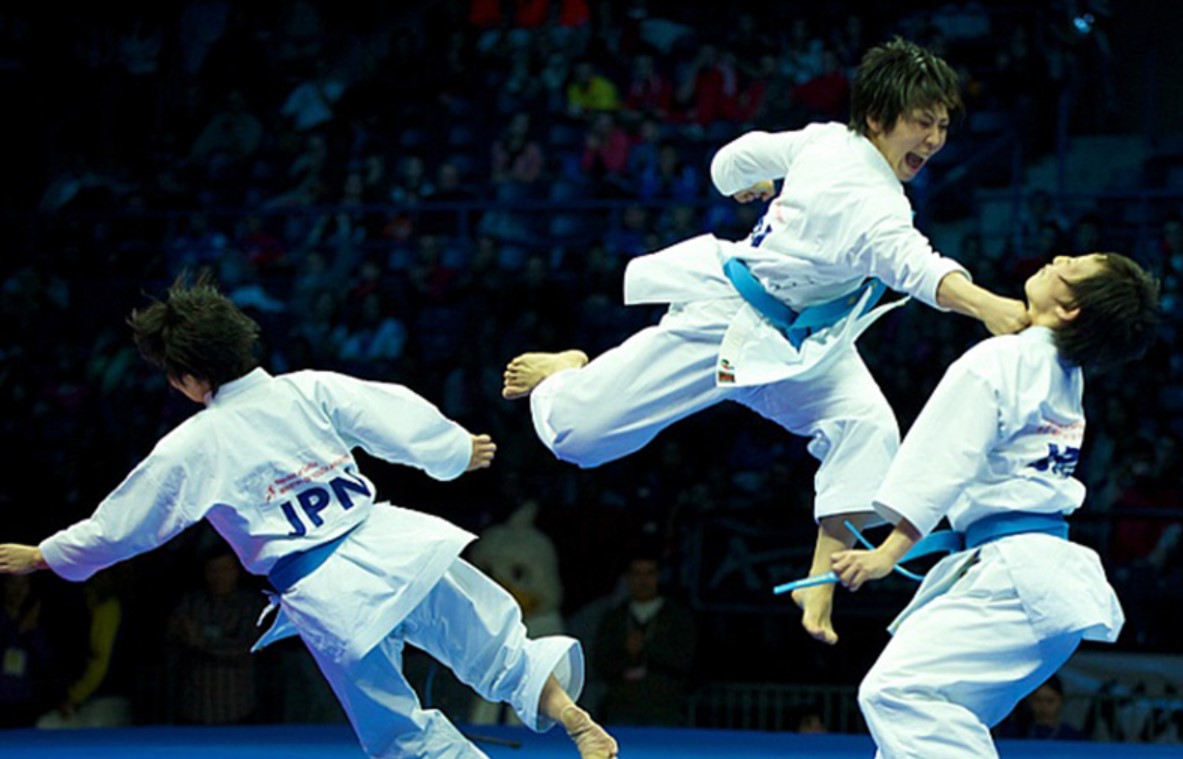 Nowadays, sport karate has a tendency to privilege artistic execution over other aspects. It is interesting to watch videos of Osaka or Kagawa Sensei delivering kata, looking almost inconvenienced to perform in front of judges, yet infusing technically flawless performances with personality and individuality.

During a recent seminar at the JKS Harrow & Kingsbury (June 2019), Nagaki Sensei gave a concrete example explaining the differences in the execution of the last kick in Kanku Sho between Budō (low kick) and competition Karate execution (high kick) – supporting the view that both had a place in the syllabus.

As much as possible it is important to balance training with all above dimensions in mind, to avoid losing the ethos and essence of kata.

In his most recent book “Shu-Ha-Ri”, Langley Sensei hypothesizes about the fact that over time, techniques have been straightened under the influence of sport karate, because circular techniques cannot be easily controlled.

This would explain the predominance today of straight punches such as Gyaku Suki (逆突き) and Kizami Suki in competitions and the fact that Mawashi techniques (e.g. Mawashi Shuto Uchi) are not commonly used anymore.

So to some extent, sport karate has led to the narrowing down of the range of available techniques, to those most useful in competitions. But in parallel, these linear linear techniques underwent a significant optimisation process to maximise speed and distance management, moving away from the traditional techniques taught under the Shotokan syllabus.

Can any positive effects be attributed to sport Karate?

– Competition karate has likely acted as a vector of growth. Back in the 1970s and 1980s, it generated significant interest and attracted many new students. As of today, it does remain an important marketing tool and it is now a recognised discipline in the forthcoming Tokyo 2020 Olympic Games ;
– The search for improved performance has led to advancements in training methods, coaching and physical preparation. With a greater understanding of body mechanics, techniques and specific applications, karateka are able to push their own limits, as any other athletes do ;
– On his website, Abernethy Sensei highlights additional benefits inherent to the practise of sport Karate: an objective way to measure skills; a positive lifestyle induced from the need to perform; increased health and fitness levels.

Ultimately karate competition should be seen as a useful component within a much wider framework, which encompasses many other facets and benefits. Some practitioners have been able to strive in competition karate, whilst remaining faithful to the path of Budō, e.g. Matt Price. His recent visit to the CKA (Mar-19) was insightful as sport karate – and commonly used tactics (feet movement, distance management, diversion) – is absent from our syllabus.

To quote Abernethy Sensei: “Within the overarching world of martial arts, there is room for, and value in, all the various aspects of what we do. If we acknowledged and valued the expertise and skills of practitioners of other aspects of the martial arts – as much as we value the expertise and skills of those of our own particular martial subset – the martial arts as a whole would benefit from the united front and we could all spend our energies building up what we do, instead wasting time pointlessly trying to bring others down.”

Ultimately to avoid cleavage, it is important (for both sportsmen and traditional martial artists) to recognise that sport Karate is not preparation for self-protection, but a sub-component of training that may bring specific, yet valuable improvements or insight into techniques developed for a precise purpose. Competition karate should therefore be seen for what it is: an optional path in the life of a karateka, likely to bring valuable benefits…