With Chinzo Machida (brother of Lyoto) in attendance and teaching us online next week – on the 1st of May 2020 (5pm UK time – refer to the Karate@Home Facebook page for details), we thought we would continue our series of articles with a short focus on Mixed Martial Arts…

Have a nice weekend all !

“If you find yourself in a fair fight, your tactics suck.” John Steinbeck

“Now is the lesson here that traditional karateka are awesome fighters and can easily throw judoka? God, no. Karate, like all traditional martial arts, has a lot of catching up to do. The lesson is simply that it is always worth looking into the techniques of various traditional martial arts. Funakoshi himself said, ‘Look to the old to understand the new.’ […] If you’re a karateka and all you’re doing is repping out the moves in the air, go have a think about some of the cooler stuff you can do with the motions you’re practising instead of just assaulting your own personal space. […] Old techniques will keep coming back in new formats, because there’s nothing new under the sun. The trick is getting them to work against what is the combat sports norm.” Jack Slack (“Lyoto Machida: Old-School Karate”)

Mixed martial arts (MMA) is a full-contact combat sport that allows striking and grappling, both whilst standing or on the ground, using techniques from various combat sports. Whilst mixed combat sports have been in existence for some time, MMA formally appeared in the mid-1990s and has significantly grown in popularity since then, both as a form of entertainment and as a distinct style of actual combat training. But rather than evolving as a place where different disciplines could compete against one another, it developed as a sport where some fighting styles became predominant.

This probably had a detrimental effect on Karate for 2 main reasons : (1) many students were driven away from traditional martial arts over the years and more resources went into MMA ; (2) following the “Japanisation” and subsequent “Westernisation” processes that occurred in the course of the 20th century, Karate evolved as an activity where the use of dangerous techniques was suppressed and has been perceived within the MMA circles as an ineffective fighting methodology in the ring. Jordan Breen, editor of www.sherdog.com commented : “No one is going to […] go out and rock a karate stance to try to win an MMA fight…”.  R. M. Schneiderman further explained (https://www.nytimes.com/2009/05/23/sports/23karate.html): “Not long after karate’s commercial popularity skyrocketed, its reputation among serious martial artists was dealt a big blow. In 1993, at the first U.F.C., Royce Gracie, […] a Brazilian jiu-jitsu black belt, cruised through the competition by quickly wrestling his opponents to the ground and choking them until they quit. With little to offer in terms of ground fighting technique, karate practitioners […] lost handily. And they continued to do so in later tournaments. […] Karate became stigmatized as ineffective and impractical.”

The respective interests in karate and MMA are best visualised in figure [1], based on the number of Google searches since 2004. The following observations can be made: 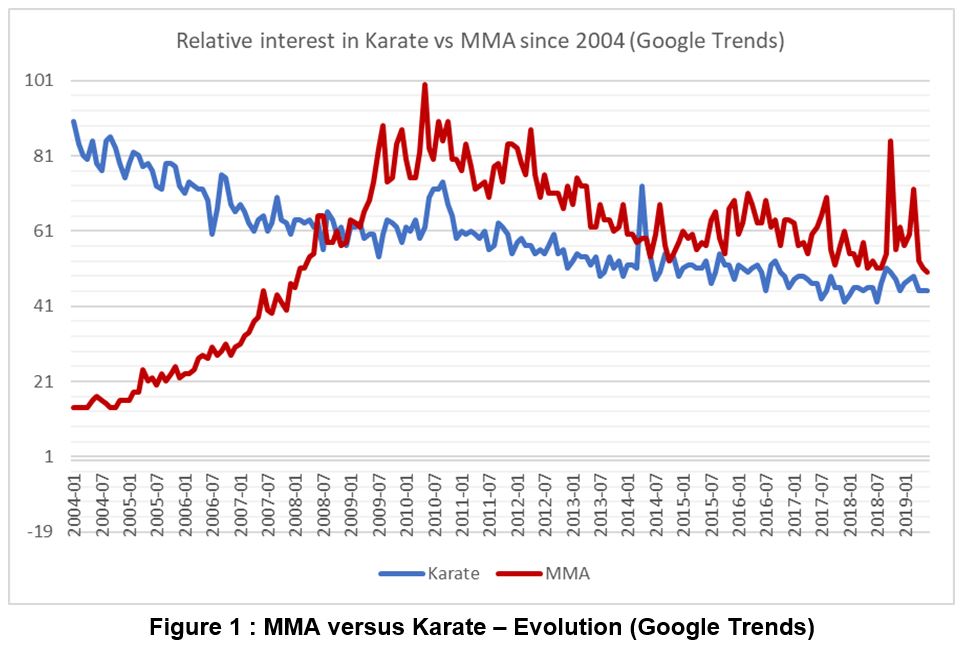 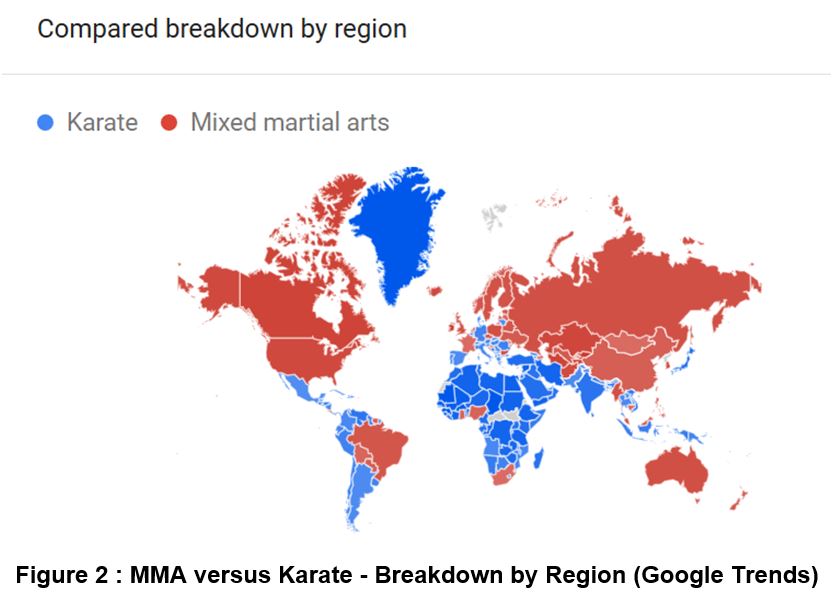 Figure [3] expands upon the above analysis by comparing various martial arts underlying MMA. Whilst general interest in Karate, Judo, Muay Thai and MMA has recently declined, Brazilian Jiu-Jitsu appears to be on the up. 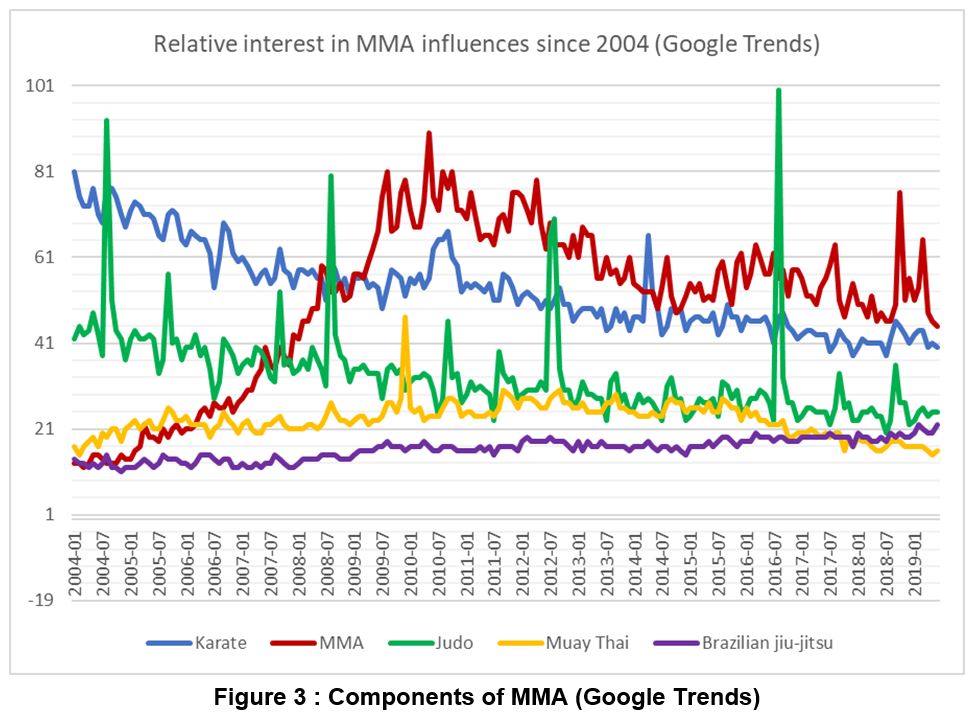 Is karate at further risk in view of the current trends in MMA?  Interestingly, Doug Tribou comments online that “predicting the next big thing in martial arts is tricky business, but it’s safe to say that karate will be in the mix.” Indeed, thanks to some MMA practitioners with a background in the art, karate has resurfaced as a relevant tool in the ring. One of these practitioners is Lyoto Machida – a native of Brazil and a son of a Japanese karate instructor, who developed some of his techniques in the MMA octagon. The perception that karate was not adapted for MMA started to change.

Jack Slack expands on this by analysing one Lyoto’s trademark techniques (called the Wedge Throw), comparing and illustrating the similarities between Judo (Sukui-Nage), Karate (Kuzuchi-wasa, made famous by Enoeda Sensei and a similar yet distinct application by Seiji Nishimura Sensei) and its application in the ring. 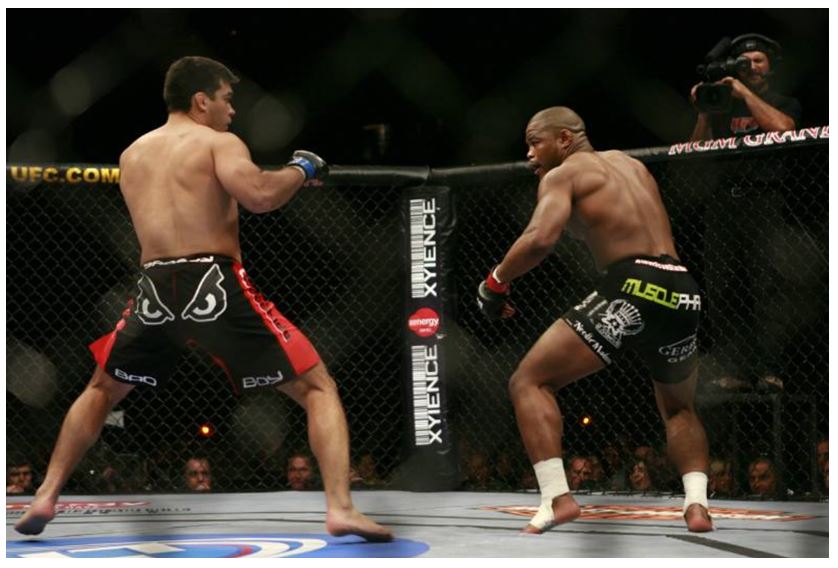 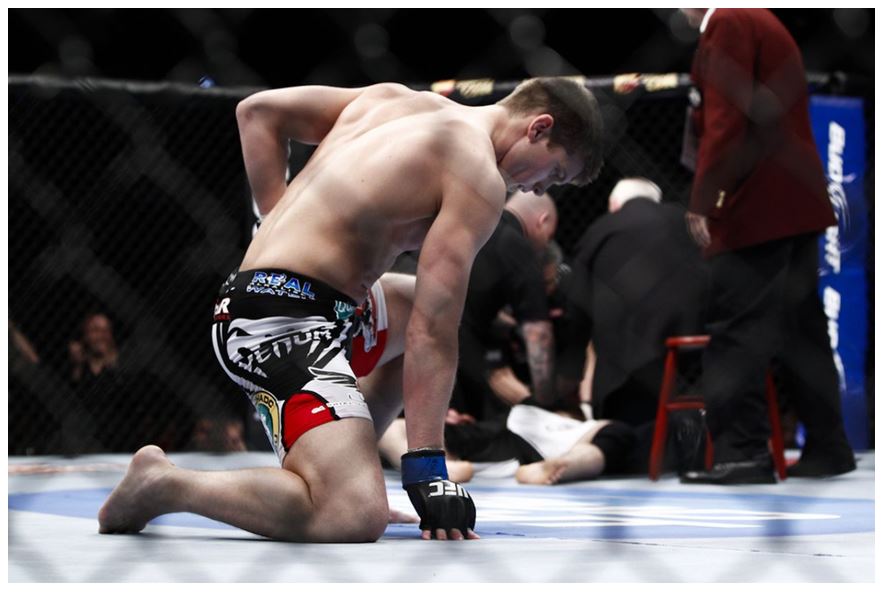 Can anything be learnt from MMA by traditional karateka? Maybe MMA fights could be a source of inspiration for development of useful techniques and applications for the most senior practitioners…