We continue our series of brief ‘lock-down’ articles by looking at the proliferation of styles and associations that occurred in the course of the 20th century, the possible reasons for such a phenomenon and the consequences.

“In the Shotokan world, split after split has defined the twenty-first century. Even in single international organisations, there is infighting and backstabbing.” Scott Langley

“One serious problem […] which besets present day karate-do is the prevalence of divergent schools. I believe this will have a deleterious effect on the future development of the art. There is no place in contemporary karate-do for different schools. Some instructors, I know, claim to have invented new and unusual kata, and so they arrogate to themselves the right to be called founders of “schools”. Indeed, I have heard myself and my colleagues referred to as the Shotokan school, but I strongly object to this attempt at classification. My belief is that all these “schools” should be amalgamated into one, so that Karate may orderly progress into man’s future.” Gichin Funakoshi (Karate-Do: My Way of Life)

Briefly looking back to Okinawa

As explained previously, Karate originates from Okinawa. At the beginning of the 20th century, two distinct styles were mostly practised on the island: Naha-Te and Shuri-Te, named after the respective cities, they originated from. Where Shuri-Te is known as linear, hard-style karate (from which, Shotokan evolved eventually), Naha-Te is known as a softer, circular type of karate. Where the former developed among upper-class royal bodyguards, the latter developed openly in the port of Naha. Where the former focuses on speed and impact, the latter favours close, rooted stances and grappling.

Multiplication of styles in the 20th century

[1] A key principle in Wadō-ryū is Tai Sabaki meaning “body-management” and referring to body manipulation so as to move the defender as well as the attacker out of harm’s way. The way to achieve this is to ‘move along’ rather than to ‘move against’ (harmony rather than physical strength).

[2] Shitō-ryū is a combination style, which attempts to unite the diverse roots of karate. On one hand, Shitō-ryū has the physical strength and long powerful stances of Shuri-te derived styles, such as Shorin-ryū and Shotokan (松涛館); on the other hand, Shitō-ryū also has the circular and eight-directional movements, breathing power, and hard and soft characteristics of Naha-te styles such as Uechi-ryū and Gōjū-ryū (剛柔流).

[3] Miyagi chose the name Goju-ryū (“go” meaning “hard” and “ju” meaning “soft”), to emphasize that his style integrated both “hard” and “soft” styles. Goju applies not just to karate, but to life in general; only hardness or only softness will not enable one “to deal effectively with the fluctuations of life”. When blocking, “the body is soft and inhaling”; when striking, the body is “hard and exhaling”.

Funakoshi, Otsuka, Mabuni and Miyagi consolidated years of training, technical know-how and influences into distinct, coherent systems which could be imparted to wider audiences in a structured manner. But their systems were also shaped by their own personal development, through Shu-Ha-Ri. Shu-Ha-Ri (守破離) is a process through which a martial artist is able to evolve his training in the following successive steps:

Therefore, these styles of karate came about through thoughtful evolution of past fighting systems, with their respective founder making every effort to preserve and adapt valuable historical and cultural traditions. Many more styles continued to appear in the course of the 20th century: 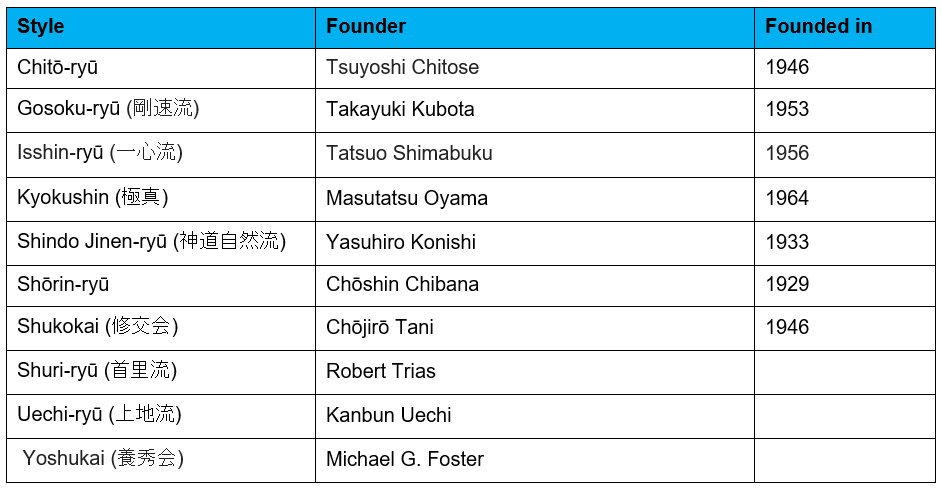 And over the years, branching continued to occur. For example, the death of the founder of Shito-ryū, Kenwa Mabuni, led to the creation of:

The purpose here is not to review or comment on differences that exist between styles or variations but illustrate that over the course of the 20th century, the number of styles and branches grew significantly. (as illustrated in the figure below) 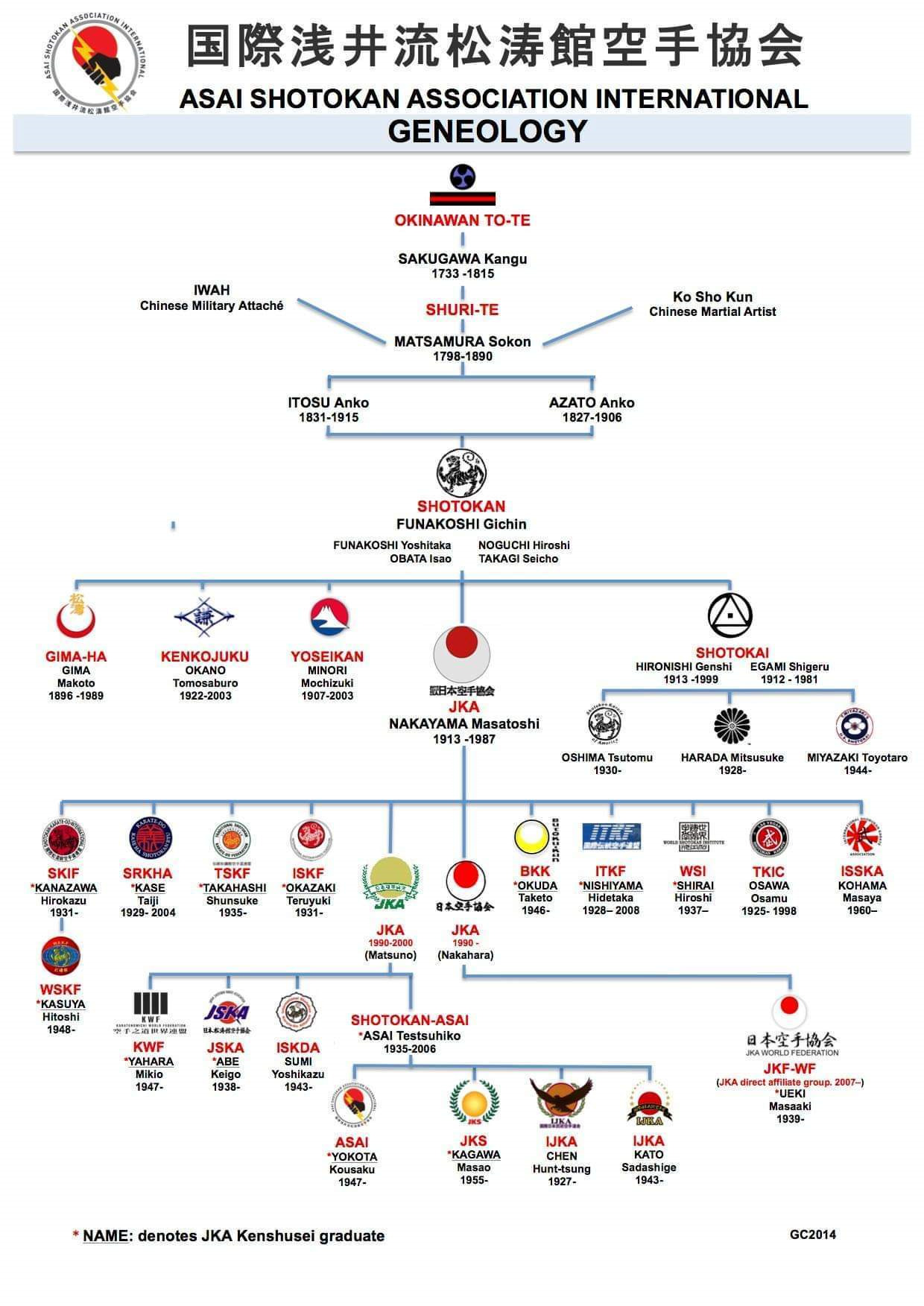 Any predicaments as a result of this fragmentation?

Linked to the above proliferation of styles and schools of thought, Karate suffered from various iniquities over the past 50 years:

Fragmentation due to political infighting, financial interest or ego

Funakoshi believed that styles would be divisive and would lead to conflicts and segregation; he was right.

One of the most documented split in the karate circles occurred within the JKA, when in 1990, a group led by Asai Sensei challenged another group led by Nakahara Sensei for the right to lead the JKA; disagreements led to a legal battle that lasted 9 years, with Nakahara finally winning the right to operate under the JKA banner; Asai began teaching under the JKS banner together with Kagawa, Abe and Yahara Sensei – before further splits occurred. The conflict shook the very foundations of the JKA.

Abernethy Sensei explains that “existing styles are frequently regarded as sacrosanct with any minor change being viewed as a form of heresy. This is not good for karate, it is not in-keeping with what the past masters themselves did, and it is not in line with traditional practises.” Historically, this culture of adhering strictly to the teachings might find its roots in the feudal nature of the Okinawan society, where a martial art system was owned by the organisation or structure who developed it. This might have been further emphasised in the mid-20th century at a time where the Japanese government strived to develop nationalistic spirits based on formal Samurai ethos, in view of growing conflicts with the West. But as Karate evolved to adapt to the modern era, this concept might have been misunderstood.

Where past evolution arose from the need to increase efficiency in combat, new “artificial” success criteria were introduced, with goodness defined as the student’s ability to precisely replicate the style enforced by the dojo: “Ha” and “Ri” were suddenly discouraged. Form became predominant and function was neglected. Abernethy further comments that “in the martial arts, “styles” can become a barrier to progress if they are viewed as something that must always be preserved and can never be deviated from. This preservation […] diverts us from the quest that the masters themselves were on […] and will ultimately lead to the stagnation and death of the “style”.”

Scott Langley explains that within the martial arts’ circles, a new school of thought recently developed where everyone’s opinion matters; anyone is allowed to define their own success criteria, neglecting the benefits and wisdom of senior opinions. Subjective knowledge suddenly takes precedence over experience, traditions and historical developments. This school of thought probably contributed to the multiplication of dojos keen to profiteer from the interest in martial arts and Karate over the past 50 years.

Scott explains that for positive evolution to occur, changes should be controlled and challenged constructively. Indeed, the danger of inward-looking approaches is stagnation, isolationism, and the development of a parallel and dangerous reality where the practitioner may believe he has reached the zenith of his advancement as a karateka.

So where are we today…

Even within a particular style such as Shotokan, we find many diverging schools of thought and teaching methods. To illustrate the variations (or inconsistencies) from one club to another, the following provides a short comparison in syllabus between two associations. As an example, the tables below compare the requirements to achieve 3rd Kyu and Shodan respectively. 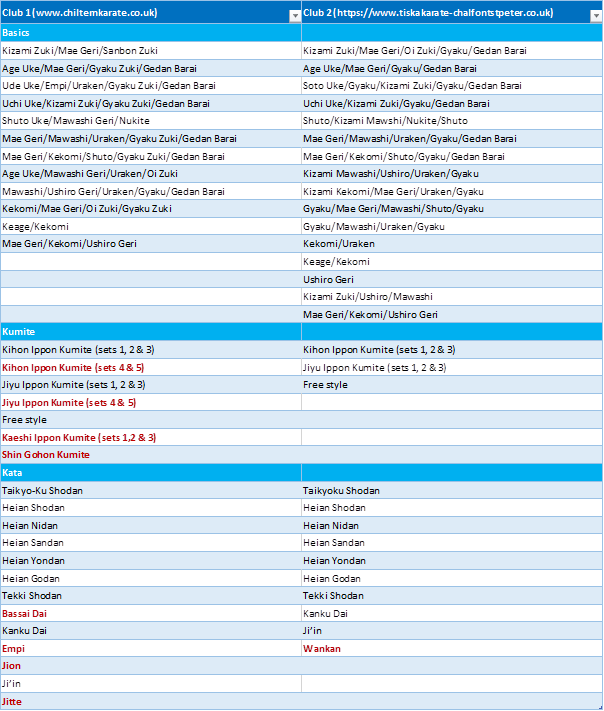 At Shodan level, we note that some important katas are absent from Club 2’s syllabus, such as Bassai Dai (披塞), Jion (慈恩) and Jitte (十手). However, Wankan (王冠) is present, despite being considered an advanced kata.